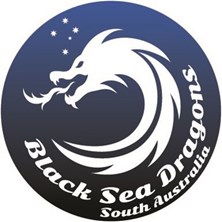 Currently competing in their first season as a new team, the Black Sea Dragons are already showing signs of a promising future, with strong paddling ethics and an even stronger crew.

Between them, Black Dragons and Adelaide Sea Dragons have over 34 years of paddling experience, with some team-members having been around since the inception of Adelaide’s Dragon Boat Community, back in 1985.

Black Sea Dragons boasts a number of members who have made the Australian Team (Auroras), and look forward to seeing this spirit of competitiveness continue as the future of the club is shaped.

Our members have competed at regattas in Adelaide, at Master’s Games, at State & National competitions, as members of Adelaide Sea Dragons (as at October 2019 as Black Sea Dragons), and on occasion as part of a combined West Coast team – Ceduna, Streaky & Port Lincoln. Our members have also competed as part of the Regional State team.  We also do Come & Try’s with students from local schools.

Meet at the Dragon Boat club at 50 Alfred Tce Streaky Bay, on the foreshore near the police station.

We use TeamApp to notify members of any training schedule changes, cancellations and updates.

Here’s to a promising future for the Black Sea Dragons!